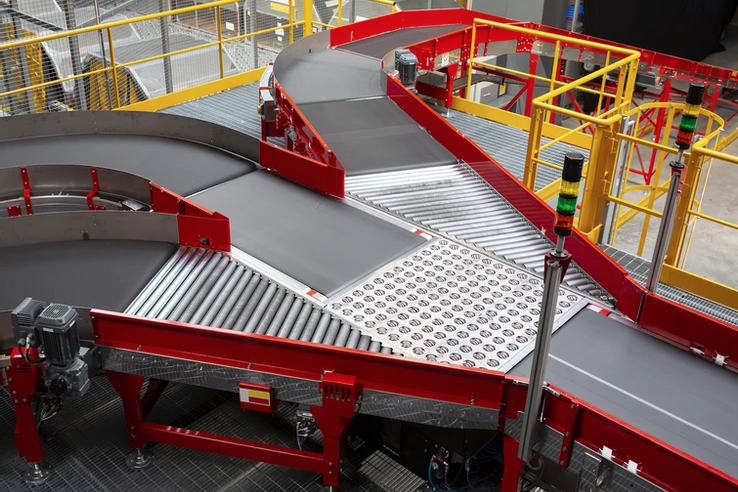 There are a lot of iconic images that often represent the Industrial Revolution. Whether it is the crowded factory floor, the cotton gin, smokestacks, workers lining up outside of a factory, or the first automobile assembly lines, we tend to associate this historical period with production. Another quintessential emblem of this period was, of course, the conveyor belt and conveyor systems that played a role in the mass production of goods.

Although not often given its due, the conveyor belt still plays an essential role in supply chains today. Many different types of conveyor systems help carry a wide variety of goods or industrial components. We thought we’d take a moment to pay homage to this useful little invention that sometimes gets a bad rep or no rep at all and focus on three modern types of conveyor belts used today.

The First Conveyor Systems and Their Evolution

The initial conveyor belts appeared out of the need to move bulk materials across distances. Many farmers, for example, found that these primitive belt systems over a flat wooden bed allowed heavy material to be transported while minimizing human labor. These first iterations of the conveyor system consisted of canvas or leather belts and were primarily used in mines and rail yards to move bulk and heavy materials across short distances.

The Famous Henry Ford and How He Popularized Conveyor Systems

If there is one man that is most popularly associated with conveyor systems and assembly lines is the great Henry Ford. The automobile pioneer would introduce the conveyor belt into his factories as early as 1913. In the early days of automobile production, the use of these conveyor systems would truly revolutionize the way cars were made and thereby increasing production and driving prices down. After a few years, he slashed the time it took to assemble the classic Model-T from 12 hours to about one hour and a half. Ford popularized the use of these systems and helped spread their use across various industries and manufacturing.

The Assembly Line and Production Boom

Of course, the Industrial Revolution wouldn’t be complete without the mention of the assembly line. This term is used for the mode of production that uses the conveyor systems and has workers working on various levels of the line. Each worker performs a different task. Today’s supply chains are fast-moving, fast-changing industries with very high demand. This requires assembly lines to be more efficient, safe, and effective than ever before. Depending on the product and the nature of its assembly, conveyor systems can be automated, computerized, involve very sophisticated robotics, or very advanced precision instruments and timing. All of this requires a high level of logistical planning, flexibility, and high-quality installation. So in any mass production process, the conveyor belt is front and center.

Modern Industries that Use Conveyor Systems

Three Types of Conveyor Systems Used in the 21 Century

So even though the conveyor belt concept has been around since 1795, various improvements have been made to create systems specific to industries or tasks. Many of today’s systems have belts that are engineered with special materials to last longer, withstand wear and tear, and carry heavy materials. Three unique conveyor systems you’ll find in contemporary work settings include:

These types of conveyors use a conveyor belt that rotates around two pulley systems. The ‘drive’ refers to the part that powers the conveyor. This is known as the drive assembly and can have an end drive, center drive, or internal drive. This propels the material forward. This might be described as a classic conveyor belt, as its design is simple and recognizable.

The name gives a big hint as to what characterizes these conveyor systems. This type of system is set up to allow the force of gravity to help move the object or material forward. These are more simple and accessible handling systems because they don’t require intricate motor systems or specialized equipment and mostly consist of motors that power the rollers themselves. Many of these systems do not have a belt. Gravity roller conveyors are often configured to transport heavier objects or equipment that can use the force of gravity to propel itself forward.

These conveyor systems are not designed for heavy-weight or large objects. Most of the systems used in the pharmaceutical industry focus on precision, safety, and speed. They are also designed to maintain sanitary conditions and assist with very specialized tasks such as compressing pills, high-speed bottle filling, blistering packaging, sorting, grouping, and more.

What Kind of Conveyor System Do You Need? Let Us Handle It.

Conveyors & Materials Handling in El Paso has served a wide range of industries since 1988. Our team of engineers develops and configures the right conveyor system for your specific needs. Whether you are looking for a simple system or one that operates with complexities and very specialized needs, we got you covered.

Want to work with a team of experts in the industry? Call Conveyors & Materials Handling and let us find the solution for you.